We left Omarate and crossed a bridge which had not yet been commissioned by the government due to a financial dispute with the contractor. The alternative would have been a dugout canoe. So we paid an unofficial fee to ride across the police guarded bridge.

This girl in the tree were amongs a few who were guarding their precious grain
We passed a few small villages and made our way along the Western side of Lake Turkana. The road very quickly transformed into a sand pit with a few jeep tracks that weaved through the now near barren landscape. We headed in the direction of a ruined, dilapidated barrack which we assumed was the border between South Sudan, Ethiopia and Kenya. A quick pit stop and we trudged our way along. We bypassed a big village on the bank of the lake, quite amazing to imagine how people survive in this harsh environment with the lake being saline and very little fresh water around. We later heard that the people who live here can be rather violent and there have been attacks, mostly on bordering Kenyan tribes due to cattle theft and water shortages. Somehow we were glad we didn’t drop in to say hello. We passed the first Kenyan special forces unit who asked about our safety and general mental wellbeing, quite amazed that we did this section via bicycle. They sent us to the police station some two kilometres away where we met some friendly guys who obviously don’t see very many people travelling through this part of the world. They wrote down our passport details in a rather large book. It was explained to us that as this is not an official border post that they take down a record of our entry and then we would get both our entry and exit stamps to Kenya at the point of exit. We were lucky enough not to pay for a visa as Kenya and South Africa (both John and I have South African passports) have this arrangement in place. Should there be any queries about our entry, the officials would simply contact the border police who would have records of our entry. This was described as the standard procedure.

The police then pointed us in the direction of St Andrew’s mission station where we would get both shelter and water. The sand, corrugations and general shoddy condition of the road became our new enemy number one and this stretch of the journey was definitely voted as the most hardcore to date. We found further accommodation, food and water at St Paul’s mission. The missions were amazingly helpful and very generous to house us overnight.

We expected a lot more wildlife along this stretch of the lake, but mostly found farmers herding their goats, camels and donkeys. Acacia trees strew the landscape with palm trees that follow the dry river beds. Apparently it only rains once a year in this area. We must have been a true blessing as it rained every night as we made our way through the region. A warm front would precede the rain where you would be lying in a pool of sweat and then a sudden bluster of wind would rip out any tent pegs followed by a torrential downpour. 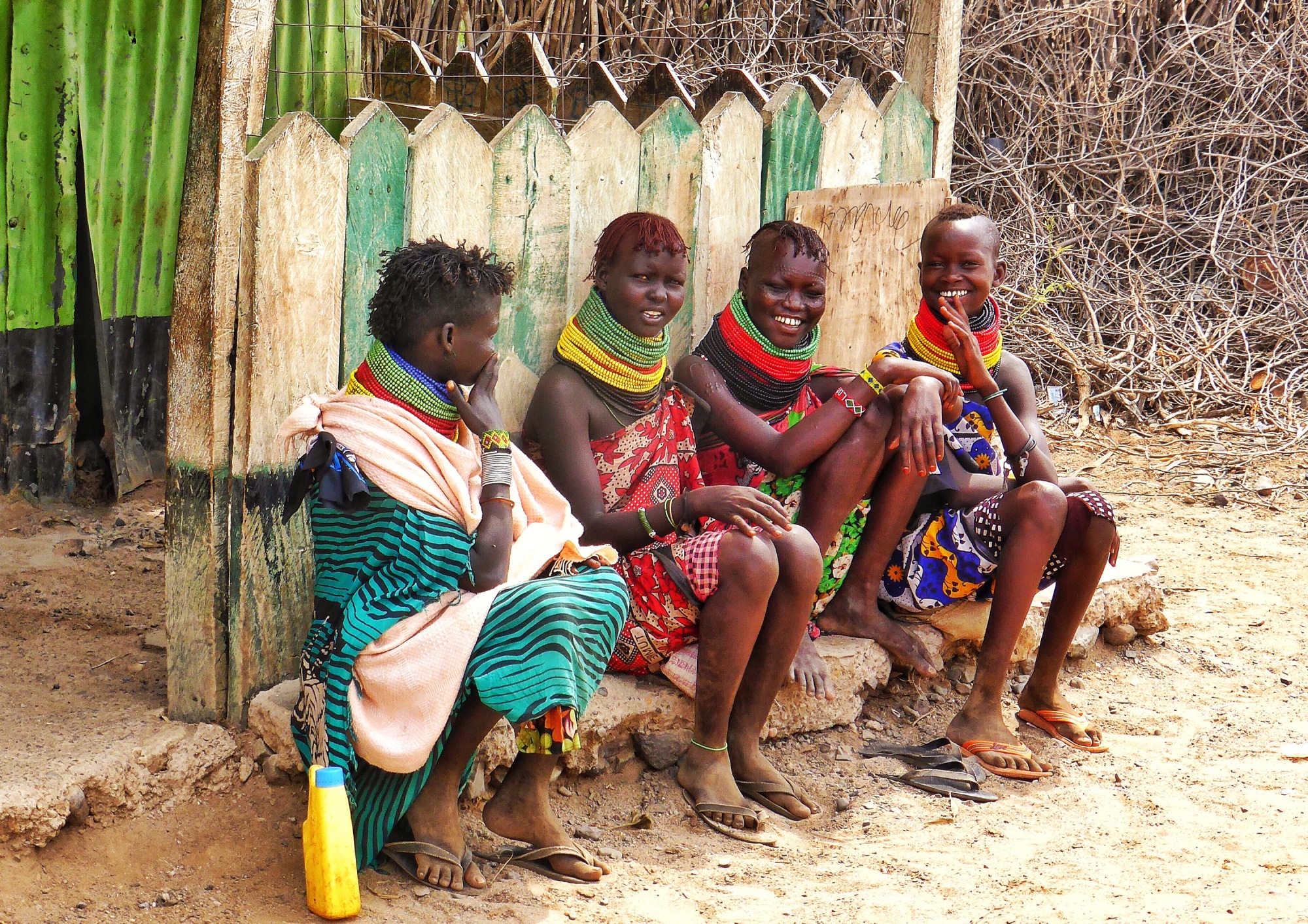 After spending a night with a friendly chief medical officer in Kalokol we made it to Lodwar where the Tarmac roads start. Yippee!

We were relieved to have a WarmShowers member, John E, welcome us. We camped out in his compound for a couple of days whilst catching our breath and trying to figure out how to continue our journey. John E is another fantastic guy who works for the Child Fund charity. He looks after two foster children and three of his own. He spent half his day taking us into town to sort out a few domestics. 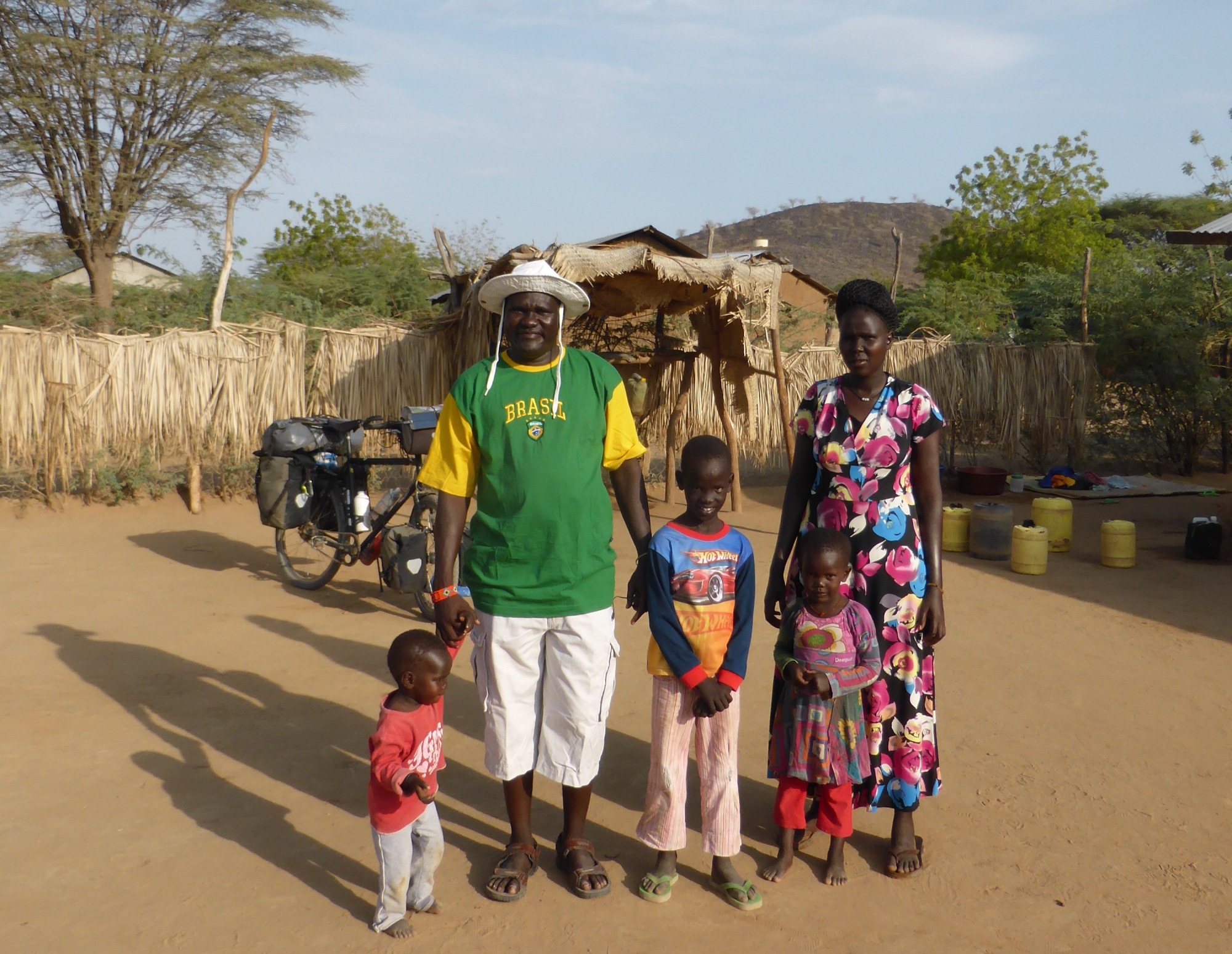 John E’s friend Mike who works as head of security for the governor of state joined us at one of the local drinking holes where we had long discussions about our safety through the next stretch. A tribal war has made it very dangerous to pass a stretch of road between Lokichar and Kitale. The Pokot people have waged war against the Turkanas due to cattle theft. It has now become common in this region for these bandits to stop any passing vehicle with a army of fully armed men with automatic rifles and taking any possessions they may see as valuable. This has apparently become their new day job and a means to fund their war.

We arrived at the police station in Lokichar and asked if we could camp out in the compound for the night. The head of police implied that he would not allow us to cycle through the “danger zone” and after negotiating to pay for three quarters of a new fuel filter they agreed to give us safe passage through the region on the back of a police Land Cruiser. Initially we would have felt safer to be on our bikes as the Land Cruiser was pelting at high speed along a very bad gravel road. Once the police rifles were cocked and we were advised to put our heads down the excitement really started. Two days before there had been a shooting at the same spot and somebody got killed for some measly possessions. We passed two trucks which had been saved by the police from being hijacked so we were quite happy to have caught the ride.

Another guy who we met at the police station (also named John) used the police transport as an escort to get his new Toyota Hilux through the red zone. He offered us a ride for the last, less dangerous section and kindly invited us to stay at his parents home for the night. His mother cooked us a delicious beef stew served with heaps of stodgy rice.

From here it was a one day ride to the border post of Malaba. A kind owner of the Blue Sky Guest house let us stay in a very expensive room for free. He was amazed by our journey and wanted to fully support our Save the Rhino cause.
The next morning turned out to be quite entertaining when we got detained for being in Kenya illegally. It was Easter Monday and we were to be kept there until normal services resumed on Tuesday. We did not have a valid Kenyan entry stamp in our passport. According to the law, we were supposed to have gone to the closest officially gazetted border post and obtained an entry stamp. This sounded quite logical, however, I replied that should we have gone to any other or closest border post from our point of entry we would be in the exact same predicament with a 3 day crime instead of 6. We explained to the official that he should contact the border police as it was them who described the process to us. Neither of us had their phone number so that was ruled out as a potential ‘get out of jail free’. We kept going around in circles for some time and it got a bit boring when the official repeatedly asked what we were going to do about it (with a couple of hints and gestures). So I got onto the phone to a contact at the South African Embassy in Nairobi. After a brief chat with the Kenyan official, things started to spring into action. The official contacted his superior who was previously unavailable on Easter Monday and after taking down our details in the big bad book of border crimes we were promptly given an exit stamp and sent on our way.

Kenya had recently experienced a spate of terror attacks including the attack on the University and everything was a bit more sensitive, so understandably our slightly unorthodox entry into Kenya did not go down too well. We look forward to visiting Kenya in the future. Next time through proper border control.